For Reinforcing Relations between the two Countries 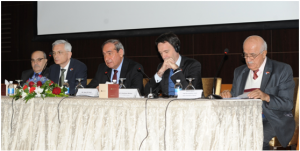 The Iraqi- French Business Council Economic Forum was hold in Bagdad on the 1st of Dec. 2016 in its 10th session under the joint patronage of the Iraqi and French governments.

The Forum activities opened with a welcoming speech by Dr. Sami Al- Araji, NIC Chairman through which he reviewed the history of establishing the Iraqi – French Business Council since 2009 and how it gathered the Iraqi private sector in all specializations and their French counterparts in “MEDEF”, under whose name more than 800 large and medium French companies are covered, the matter that represents an important economic link between the two countries. Dr. Sami expected that this meeting will completely differ from previous ones as more discussions will be made between public and privet sectors regarding founding real new partnerships in Iraq generally and liberated areas particularly.

French Ambassador, Mr. Mark Berety in his turn expressed his delight for holding this forum and his hope for it to be a reinforce for the political relations between the two countries which have witnessed perceptible development by exchanging visits, referring to the French military support for Iraq in its war against terrorism and stressing at the same time the importance of leveraging the economic relations to reach the same developed standards of the political ones.

Mr. Raghib Bleibel, the Iraqi Co. Chair in the Iraqi- French Business Council expressed his hope for sustaining such meetings as this Forum in order to foster the economic link with the French side, calling for the Iraqi investors to seize this opportunity to lay down a basis for the joint work on the long run with the French in the various sectors like Oil & gas, Industry, Banking, Arming … etc in the way that raises the relations to the wished standards.

The opening ceremony included a speech by Mr. Steven Michel, French Vice Co. Chair of the Iraqi- French Business Council, through which he defined the most prominent reasons that led to deteriorating the economic activities between the two countries which were: the exceptional security situation especially during the last two years  and the economic crisis due to the sharp decline in oil prices and its effect on all other sectors, expressing his hope that the recent victories in Mosul operations and the expected rise in oil prices after the coming Vienna meeting will contribute to supporting the Iraqi economy in general.

NIC Chairman also reviewed a presentation underlying the most important investment opportunities available in Iraq in all sectors.

On behalf of the Iraqi privet sector , Mr basim Jameel Anton presented an overview of the most prominent business opportunities available in Iraqi in all sectors.

Moreover, the Forum was attended by a number of Ministers, the General Secretary of the Ministers’ Council, Parliament members, Deputy Ministers, and a number of DGs in the Iraqi Ministries.