Chairwoman of the National Investment Commission Suha Daoud Najjar meets with the Minister of Culture, Tourism and Antiquities 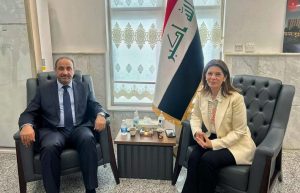 During the meeting, aspects of joint cooperation between the NIC and the ministry were discussed to activate tourism in Iraq by encouraging the establishment of investment facilities and projects in the tourism sector.

Najjar stressed the importance of establishing such projects, as one of the sources of national income with  a significant positive impact on all other economic sectors, as well as an important factor in providing many job opportunities in all fields

She also explained that the tourism sector is one of the important economic sectors in Iraq regarding its archaeological and historical sites, holy shrines and other religious sites which are considered as the main attraction factor in tourism. 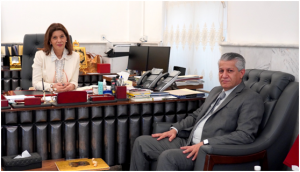 NIC Chairwoman, Suha Dawood Najar, assured that NIC is working as a one professional team with Baghdad Municipality aims at going forward with the new investment projects in and around Baghdad and one of these projects is Al- Rafeel City citing in the BIAP surrounding area.

She stated during her meeting with Baghdad Mayor, Eng. Ammar Mussa, on Tuesday 16th of August that an agreement has been reached with the Mayor to hold a series of periodical meetings between the concerned teams from both sides to facilitate procedures of obtaining approvals on usages and fundamental designs of the new cities in Baghdad and committing to implement infrastructures for these projects and the roads nets connecting

them to Baghdad and other provinces, in addition to discussing other preparations needed for the post licensing stage.

She considered this high level coordination between the two sides an important start for further supporting projects in and around the capitol.

Mayor Eng. Ammar Mussa, in his turn, showed that this meeting came to discuss a number of obstacles facing the implementation of big projects and during which solutions have been found to contribute in accelerating achieving these projects that represent a civilized exposure for the capitol through obtaining the required approvals from the Ministers’ Council Secretariat. He also assured that continual periodical meetings shall take place between the two sides reflecting the seriousness to have all projects fully accomplished surpassing any likely distractions.

During her meeting with the chancellor of Baghdad University…

NIC Chairwoman, Suha Dawood Najar, assured that having Baghdad University as a supporting and consulting side for educational projects executed through private investment represents a solid basis for guarantying quality education in Iraq.

She added during her visit to the chancellery premises of Baghdad University in Jadiriyah on Tuesday 16th of August and her meeting with the Chancellor Dr. Munir Hameed Al- Saadi, that the honorable history of Baghdad University that traces back to the fifties of the last century makes it super qualified to be a supporting and supervising side for a large number of investment projects in Baghdad and other provinces according to the type of these projects.

Dr. Munr Hameed Al- Saadi, in his turn, assured that the meeting included discussing the governmental plan for 2030 and the expectations to witness large increase in the number of

students who will register for high education and taking the necessary futuristic actions represented by creating additional educational seats for the expected numbers in both public and private sector universities. 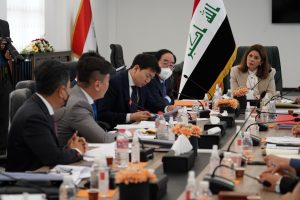 NIC Chairwoman, Suha Dawood Najar, assured that regarding the first phase of negotiations with Hanwah South Korean group, NIC has specified a number of legal and financial conditions to go forward with the project on the basis of the outputs of the detailed auditing process of Bismayah projects and is waiting for Hanwah group reply.

She added that despite NIC’s willingness to implement the whole project by Hanwah, it still has several options to complete it in case of the South Korean Company insistence on keeping the former contexts that we do not consider fair for the Iraqi Government and citizen.

And she declared that NIC legal and financial stance is sound and secures the ability to negotiate and lay new implementation mechanisms down for the rest of the project’s time.

Najar also promised to keep all phases of negotiations with the Korean side transparent and clear for the public.

NIC presided by its Chairwoman, Suha Dawood Najar, is continuing for the second day its negotiations with Hanwah South Korean company with the attendance of all concerned officials from both sides in serious attempts to resume work in Bismayah project to reach the final goal of constructing 100 thousand housing unit. 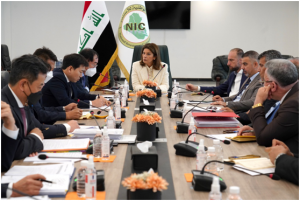 During the meeting the two discussed means of developing bilateral relations between the two countries and a number of investment issues of mutual interest with reviewing a number of available investment opportunities in various economic and investment fields. 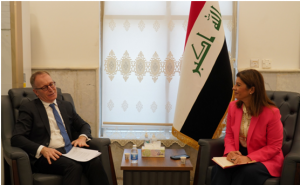 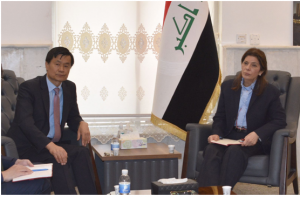 In its first meetings headed by Suha Dawood Najar 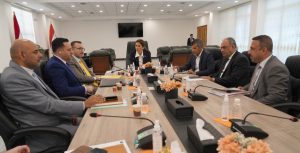 The Committee discussed a number of regulations and instructions regarding amending investment licenses and the laying down of certified regulations that can regulate the process and ensure the streamlined achievement of projects with limiting corruption possibilities.

The Committee also discussed the reasons of the obstacles that faced the work of the previous Committee formed according to Order No. (51)  and amended a number of regulations in a way that contribute to activating the current investment process in Iraq.

The Committee decided to hold its meetings on weekly bases to discuss the projects subject to amendment in addition to discussing listed points on the Committee’s agenda and issuing the new regulations and instructions to tackle failures and obstacles hindering the smooth achievement of projects. 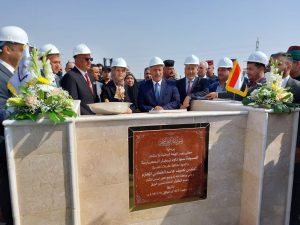 Chairwoman of the National Investment Commission, Suha Daoud Najjar, today Sunday the 20th Feb.2022, put the cornerstone of (Al-Kawthar)  factory for paper, cardboard and boxes, with a paper production capacity of 250 tons /day, which covers 17% of the country’s need in addition to another line for the production of cartons with a capacity of 120 tons/day, covering 15% of the country’s needs, according to the Ministry of Planning statistics.

In her speech during the opening ceremony, which was attended by the Governor of Holy Karbala, Eng. Nassif Jassem Al-Khattabi, and a number of Karbala Parliament representatives,

she expressed her optimism regarding putting this industry back on track again in Iraq and supply our hungry markets of this vital industry.

Al-Najjar expressed her hope that this vital industrial project, which is one of the environmentally friendly factories, will be one of the aiding tools to stimulate the economy in Karbala province and an important source for providing job opportunities for the community of Karbala

She added that Karbala governorate is one of the governorates that has succeeded in attracting a distinguished elite of investors and businessmen in various sectors, including the industrial one, which we seek to be a solid economic base for Iraq, which, along with other sectors, represents a springboard towards sustainable development and an end to the rentier economy in Iraq, as we have in our future plans for this safe and investment attractive governorate, many projects, especially in the tourism sector, and this reflects the serious and continuous cooperation between the PIC and officials in the local government of the governorate.

She emphasized the NIC keenness to support and encourage the establishment of vital investment projects in all governorates of Iraq and in various economic sectors.

Governor of the Holy Karbala, Engineer Nassif Jassem Al-Khattabi, said that this project comes within a series of projects implemented in the province, which aim to diversify the economic base in it through investment, as this project will have a positive impact on supporting food industry factories due to its important role in the packaging process.

Al-Khattabi expressed his thanks and appreciation to the National Investment Commission for its support in establishing investment projects, which is beneficial to the city.

NIC Chairwoman, accompanied by the governor of Karbala and a number of officials in the governorate, inspected the 100% completed first phase of the project, which represents 50% of the project’s whole completion rate.

During her tour, she also paid a visit to Karbala Al- Ghadeer housing project, during which she listened to details from the project CEO, Mr. Ibrahim Al-Tamimi. Also she visited the iron and steel plant in the province. The opening ceremony was attended by representatives of the two holy Husaini and Abbasi shrines, as well as a number of community leaders and sheikhs in the province. 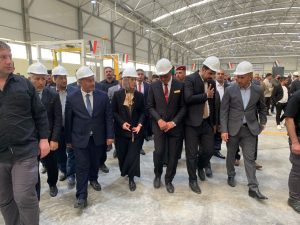