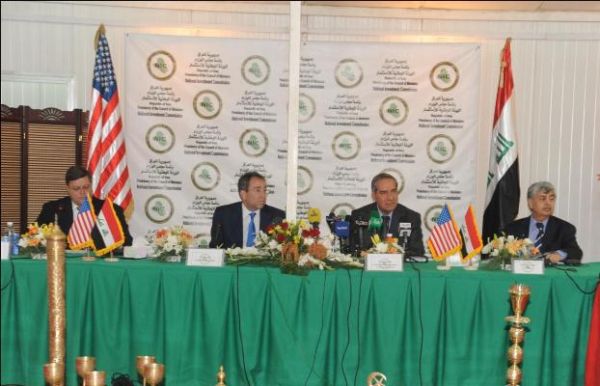 Dr. Sami Raouf Al-Araji Chairman of the National Investment Met with Mr. Thomas Naidz Deputy U.S. Secretary of State and the economic delegation accompanying him on Saturday, 09/07/2011.
NIC Chairman said during an expanded press conference that the meeting was a continuation and update of the meeting held in Washington, which was taken care of by U.S. Secretary of State Hillary Clinton and her deputy, Mr. Naidz to see the progress made in the light of the first meeting and to have a close glimpse at the situation in Iraq.
Dr. Al- Araji also announced the official opening of the Iraqi-US Business Council in Iraq, which would be an extension of the work of the U.S. Chamber of Commerce in Iraq, that will deal directly with the Iraqi private sector to promote economic development in Iraq, particularly in the field of small and medium industries and will also deal with the National Investment Commission to attract investors to enter into various economic sectors.
NIC Chairman reviewed during the bilateral meeting with Deputy U.S. Secretary of State and his group a number of vital projects in Iraq, seeking support for some U.S. financial institutions to provide the required facilities to investors and to help in their entering Iraq as soon as possible, especially in the areas of housing, electricity and infrastructure, which are often in need of funding, the matter that needs giving reassurance to the U.S. banks by two important American governmental institutions which are the American Export-Import Bank and the American overseas Private Investment Corporation .
They are two very important in supporting the great effort made with the investors in the various disciplines and what gives them the security that their investments are going in the right direction and that Iraq is the headquarters of the economy in the Middle East, stressing that Iraq is open for investment to all countries in the world for the best offers in all sectors and various forms of investment and that there is an investment map in each of the governorates of Iraq as well as The National Map.
For his part, Deputy U.S. Secretary of State Thomas Naidz said that the U.S. is the best partner and best friend of Iraq and Iraq was lucky because of having a lot of diplomatic efficiencies in it, saying that the transitional phase in the diplomatic field has already begun and that this transition is a big commitment to the private sector in Iraq , calling for U.S. companies to exploit opportunities in Iraq in different fields in cooperation with public and private sectors, stressing that more efforts in this area would make excellent relations between the two countries.
Mr. Bruce Larsen, President of the Iraqi – Us Business Council welcomed any one from the Iraqi side wants to enter the Council’s membership and participates in its works that is encouraging U.S. investment in Iraq by Iraqi and U.S. governments all the way to the goal of a prosperous Iraq.
The meetings were also attended by Mr. James Jeffrey, U.S. Ambassador in Iraq, members of the U.S. embassy in Baghdad, in addition to members of the US-Iraqi Business Council