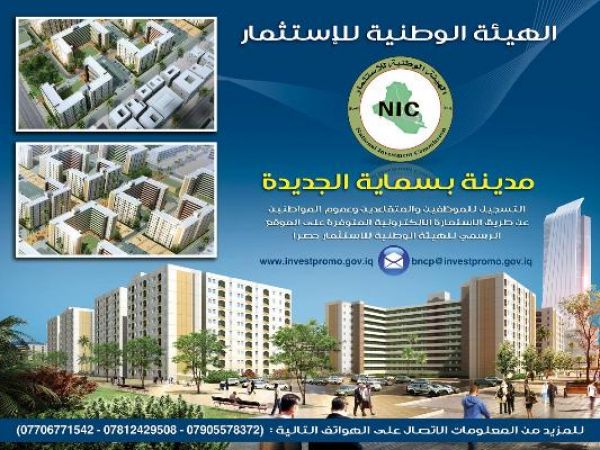 During his meeting and Swedish Trade Minister
Chairman of the National Investment Commission, Dr. Sami Al-Araji .. Today Iraq has become a magnet for touched

The head of the National Investment Commission Sami Raouf al-Araji said Iraq has become today a magnet for investors to the advantage of its promising investment opportunities in all sectors of the economy, as well as the advantages and guarantees provided by the Investment Law No. 13 of 2006 amending for all those who wish to enter the Iraqi market promising to invest in them.
came that during his meeting with Minister of Foreign Trade Swedish (IFA Brolink) and her accompanying delegation Thursday, 19.04.2012 in the presence of Governor of Baghdad Dr. Salah Abdul-Razzaq, Undersecretary of the Ministry of Construction, Mr. Faleh Al-Amiri and a number of business representatives from the private sector in both countries, noting that Iraq and Sweden enjoy relations friendship good and economic relations are strong.
said al-Araji, that the Commission discussed with Secretary guest investment map for Iraq and the investment opportunities available there and in different sectors, including the (industry, agriculture, health, transport, communications, housing, education, tourism, infrastructure, etc.), as well as Log in Swedish companies to contribute to the investment process through direct investment or partnerships investment strategy with the Iraqi private sector for the implementation of small and medium enterprises that concern the citizen.
For its part, expressed Minister of Foreign Trade Swedish thanks for the warm reception that met him from the Iraqi side, announcing her country’s desire to establish Conference on business investment in the Swedish capital (Stockholm) end of the year under the auspices of the Ministry of Commerce Swedish Federation of Chambers of Commerce of Iraq and Bhoudoraadd of Ministers of both countries and representatives from the private sector, where the conference aims to create visions and a common policy for the expansion of trade between Iraq and Sweden and the establishment of investment partnerships far term.
, adding that the visit to Baghdad is the fifth after her in 2003 and it’s on every visit fumble significant progress on the level of security and economic situation in Iraq, and that it will encourage Swedish companies to work in Iraq and the exploitation of promising investment opportunities and available in it.
And at the same explained Governor of Baghdad Dr. Salah Abdul Razak said his recent visit to Sweden, where he met the President of the provincial council in Stockholm and President of the Chamber of Commerce, Swedish and a number of officials resulted in a program of cooperation in various fields with the Swedish capital (Stockholm) aims to develop bilateral relations based on common interests and maintain plans to sign a memorandum of understanding between the two capitals early next month, expressing his willingness Baghdad province to provide the required support, including for companies wishing to invest in the province, including the Swedish companies and as guaranteed by law invest No. (13) for the year 2006, that the province has allocated one billion two hundred million dollars of investment projects for this year.
For his part, U.S. Undersecretary of the Ministry of Construction and Housing, Mr. Faleh Al-Amiri said the ministry want in collaboration with Swedish companies to enter into the area of housing, particularly buildings and low cost, which fall within the housing project a large prepared ministry within the project infrastructure that will be implemented payment system on credit, in addition to entering partnerships with Facilities ministry, expressing about the need for the ministry of equipment and machinery for Aesm modern and sophisticated than in the area of housing and construction that could processed by Swedish companies to the Ministry.
On the sidelines of the meeting has been offering a number of inquiries and questions from representatives of the private sector in both countries through which the exchange of ideas and opinions, which aims to develop relations in order to serve the common interests of both sides