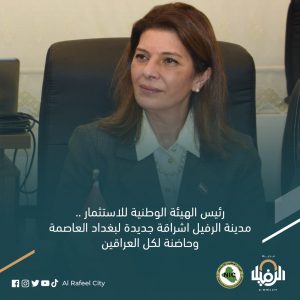 Chairwoman of the National Investment Commission, Suha Daoud Najjar, clarified that lands surrounding Baghdad International Airport are tainted by a lot of misunderstanding and inaccuracy in dealing with information in public opinion, which requires providing the necessary clarification in this regard. We are working for the last few months on checking legal and technical procedures taken by some investors to own those lands and the reasons for building and encroaching on the public property of the state in that area, including the main streets that connect the governorates with the capital Baghdad, which necessitated the withdrawal of these licenses and bring property back to the state.

Therefore, NIC started working with other concerned parties and formed a complete technical team   to develop a new urban planning that puts it in the ranks of its counterparts in neighboring countries. These efforts culminated in the approval of the city of Rafael, the new administrative capital in Baghdad, designed by specialized international companies managed in coordination with the concerned ministries and institutions within a ministerial committee supporting the project, which was presented to the Council of Ministers with all its details, especially Residential projects, service and administrative units, and industrial projects related to the airport and surround the whole project with the green belt to achieve the required clean environment. it is planned for the construction works to continue for five years, subject to change according to needs and procedures.

Regarding the news about displacing about 300,000 people from this area and the non-observance of international laws that there should be no residential areas near airports, we assure all the followers and those interested in the subject that the main design of the Rafael city project has taken into account all the technical, architectural and other details with the specialists in this matter and that the implementation of these complexes And the services will be in accordance with the latest international and security standards surrounding cities and the construction of airports, and this project was not announced until after extensive studies in all aspects related to it and after conducting various disclosures and surveys of the area surrounding the airport, which will also be ready for expansion in accordance with the developments. heights were determined by global ans local authorities in accordance with international engineering and security standards and the Civil Aviation Authority. There will also be a maintenance center for aircraft, air freight and other necessary logistics services within the vicinity of the airport.

Achieving a city of this size will not take place without the concerted efforts of all the sincere efforts in the country and the desire to serve the Iraqi people and economy. It is not a privilege for one person in the state, but rather a national achievement that counts for all.