During her visit to a number of investment projects in Nineveh Governorate, Chairwoman of the National Investment Commission Suha Najjar: We are studying compensating investors affected by the ISIS era in Mosul

During her visit to a number of investment projects in Nineveh Governorate, Chairwoman of the National Investment Commission Suha Najjar: We are studying compensating investors affected by the ISIS era in Mosul 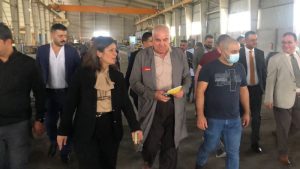 Chairwoman of the National Investment Commission (NIC), Suha Daoud Najjar, confirmed that NIC is studying compensating investors who are still continuing their investment projects despite suspension for four years due to ISIS terrorist gangs’ era and the liberation operations with additional advantages.

She indicated that the study includes submitting a proposal to the Council of Ministers and the Ministry of Finance to extend customs and tax exemption period for those projects guaranteed by the investment law for projects with investment license, where the extension period will be determined according to the status of each project and the duration of its suspension.

During a press conference held while visiting a number of projects in Nineveh Governorate, NIC Chairwoman expressed her happiness with the growing investment movement in the governorate in the various economic sectors, as well as the seriousness of investors to move forward to implement their investment projects that contribute to solving part of the unemployment crisis in the governorate and restore its distinguished position as a cornerstone of the Iraqi economy. She pointed out that the government is saving no effort to increase investment opportunities in Mosul in various sectors.

During her visit to the governorate, on Tuesday, August 17, NIC Chairwoman inspected a number of important investment projects in the city, listening to the investors’ comments and suggestions regarding the development of these projects, including the project of Mosul Iron and Steel Company, which costs 20 million dollars and has a design production capacity of 260 tons/ day of standard rebar, In addition to the residential city of Ain Al-Iraq, to build (4000) housing units, at a cost of more than two hundred and eighty-nine billion Dinars. She concluded her visit with a meeting with Mr. Najm Abdullah Al-Jubouri, Governor of Nineveh, during which she discussed the available investment opportunities and the possibilities of overcoming the obstacles facing the reality of investment in the province.