For Establishing the First Airport for Air Cargo in Iraq 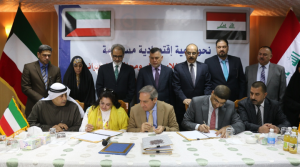 NIC and Diwania governorate signed on the 21st of Jan,15 an investment contract with al- Nasiriyah Kuwaiti company to establish Al- Diwania International Commercial Airport. The contract was signed with the attendance of Mr. Baha Al- Araji, Deputy Prime Minister and a number of Parliament members in addition to Diwania Governor and provincial council chairman and members, while the Kuwaiti side was represented by Mr. Ghassan Al- Zawawi, Kuwaiti Ambassador to Baghdad and Shekha Iman Nasir al- Sabah, chairman of al- Nasiriyah Kuwaiti group of companies.

Deputy Prime Minister assured in his speech during the ceremony that investment in Iraq was a need and now it is a crucial must that the government is seriously considering in submitting all facilitations and privileges to the companies willing to invest in the country according to Iraqi laws, appreciating the Kuwaiti positive stance towards Iraq.

In his turn, Mr. Jawad Al- Polani, Chairman of the parliament Investment and Economy committee said that establishing such big projects in the provinces would be an important start up for economic development there, announcing that the beginning of February shall witness large preparations to optimize the legal environment and promote investment in Iraq expecting investment volumes to reach more than 180 billion $ during the forthcoming phase in the various economic fields.

NIC chairman, Dr. Sami al- Araji had started the ceremony with a welcome speech during which he asserted that this project will be the first nucleus for development in Diwania province and it is the first project in Iraq for Air cargo and establishing a free zone provided with all logistic services, praising the role of Diwania governor and the chairman of the provincial Council who led successful negotiations starting with choosing the executing company and ending the final phase of signing the contract.

NIC chairman highly evaluated the supporting role of the Council of Ministers who had voted for the project implementation, and added that NIC had checked the history of the Kuwaiti company and its supporting companies finding them one of the successful companies in the field and completely efficient to execute such an important edifice.

Dr. Ammar al- Madani, Diwania governor explained that the governorate had worked to make the notion of establishing a commercial airport in the province a success through negotiating with the concerned sides in the central government who had welcomed the notion and as a result a big company was selected to implement the project according to laws adopted in record time assuring that the project is aiming at reviving the commercial activities in Diwania and other adjacent provinces.

Shekha Iman al- Sabah, chairman of al- Nasiriyah Kuwaiti group of companies stated throughout her speech that this strategic project which comes within the framework of developing infrastructure in the Republic of Iraq forms a strategic point in the region in the field of air cargo and transport which will be implemented by Iraqi hands.

Worth to mention, that Diwania new airport had been planned for to be the main airport for transporting agricultural products and the center for import and distribution to the southern and middle areas of Iraq, since it will be the only one that distances less than 2 hours on land from all main cities in the south with total cost of 1,350,000,000 $ on an area of 7000 donum.

The airport was designed with modern units in a way that allows expansion in the future to meet expected demand and will also serve people in the southern areas and religious tourists in the coming years.

The airport, which focuses on attracting the logistic freight companies and international cargo agents, will include a takeoff runway with length of 3600 m and 45 m width the matter that makes it efficient to receive all types of planes.