With big local and international attendance 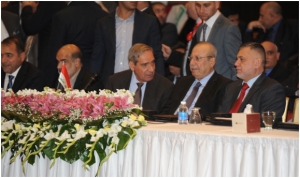 Baghdad witnessed Wednesday the 4th to Thursday the 5th of Feb.15 holding the first International Investment and Economy Conference under the patronage of Dr. Saleem al- Joboury, Head of Iraqi Parliament and organized by the Parliamentary Committee of Investment and Economy in cooperation with NIC and with the attendance of high level legislative and executive officials in addition to a number of ambassadors to Baghdad, local and international businessmen and investors.

The conference works started with a speech by Dr. Rosch Nuri Shawees, Deputy Prime Minister through which he said that the investment process in Iraq had been affected negatively by several factors as adopting old inherited laws that contradict with the investment law, beurocrasy, land allocation problems, administrational and financial corruption and the weak punitive measures taken against it in addition to the old fashioned banking laws that can’t cope with the modern investment trends.

Shawees continued, saying that achieving full economic jump requires ensuring stable investment climate reinforced by legislations and laws with comprehensive cooperation between legislative and executive authorities in this regard and cancelling all old laws that contradict investment goals, referring to the government’s determination to reinforce economic growth in Iraq and encourage investment through finding suitable solutions for all obstacles facing investors in the country.

Mr. Jawad al- Polani, Head of the parliamentary committee for Investment and Economy assured the Iraqi government keenness to adopt any real initiative to diversify economy and create sustainable economic development, stressing that an investment conference or investment law is not enough to enhance investment in Iraq, but we are in need for a package of laws that can organize the investment process in whole.

Meanwhile, NIC chairman specified five solutions to remove obstacles that face investment process, if applied, shall make a dramatic jump in investment through activating the One Stop Shop to attract big investors and get rid of centrality in decision making in order to achieve economic reform.

Al- Araji also stressed land allocation problem addressed by investment law No. 13 for the year 2006. It obliged public entities to provide useful lands to NIC in order to be granted to investors. This article was not activated; therefore, we should seriously consider allocating investment lands to be available within our investment map in each province.

The other issue that Al- Araji addressed was financing investment projects by reconsidering banks law No. 94 for the year 2004 aiming at making it of developmental nature in addition to being commercial, referring that there is a suggestion to the Central Bank of Iraq to fund newly established private banks in addition to the Industrial, agricultural, real estate and other banks. NIC proposed fund would be of 5 billion $ with 0 interest as performed to activate Small & Medium projects in US and EU.

After delivering all speeches of officials, Head of Parliamentary Committee of Investment and Economy announced the hearing session arranged to listen to Iraqi, Arab and foreign investors’ requirements and problems when German and Turkish ambassadors reviewed number of impediments facing their countries’ investors and companies in Iraq. Iraqi investors required privatizing the Iraqi state owned and mixed sector companies especially those which suffer from lack of finance according to a specified time table.

Council of Ministers’ Advisors Commission Chairman, Mr. Thamir Al- Ghadhban also delivered a speech during the event through which he stressed the Government’s real willingness to change and benefit from the past lessons, adding that the current economic pressure is imposing on government taking a series of reform actions that enable the private sector to take its role according to a strategy will be announced at the end of next week, assuring that a study, have already been laid down to privatize the public and mixed sectors, will soon be submitted to the General Secretariat of Ministers Council within a comprehensive strategy under the title of “Restructuring and Reform of State Owned Companies”.

Governor of the Central Bank of Iraq, Mr. Ali Al- Alaq stressed, in his turn, the importance of announcing the state investment projects for investors according to investment law No. 13 for 2006 as amended, adding that the central bank had taken a package of procedures like increasing cash in private banks to support investment process in the country.

In the second day of the conference, there was a speech delivered by Dr. Adel Abdul Mahdy, Minister of Oil who admitted that investment in Iraq is currently facing big challenge with lots of obstacles, the matter that prompted the Iraqi government and parliament to lead important economic reforms aiming at creating new investment climate free of hindering laws. Abdul Mahdy referred that a number of Ministries and local provincial governments started to stranglehold the investment process under the pretext of pertaining the public wealth and saving the provinces. That forms one of the most serious factors that create a dismissing investment environment.

Minister of Oil also said that Oil sector is one of the biggest investment sectors especially after the licensing rounds and the international companies trending to participate.

Provincial investment opportunities, achieved and under construction investment projects were presented by the Provincial Investment Commissions Chairmen with prevailing the most prominent privileges that each province enjoys.

The works of the second day of the conference included also submitting green papers that were divided among several committees regarding the reforming actions required to be done on many laws contradicting with the investment law. These green papers were discussed in details in order to reach satisfactory recommendations can contribute to the reconstruction process of Iraq with wide participation of the private sector. 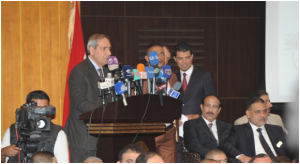