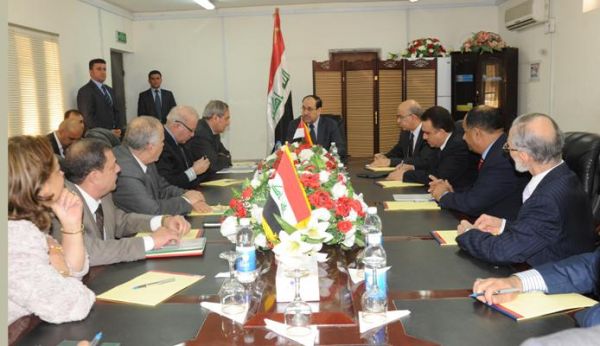 The Iraqi Prime Minister H.E Mr. Nuri Al- Maliki assured the importance of liberating the Iraqi economy from all comprehensive central mechanisms to attract capitals and activate the private sector role through accelerating the process of legislating laws that shall facilitate the investors work in Iraq in addition to amending or eliminating the legal texts that contradict the investment law No. 13 for the year 2006 and its amendments.

Maliki’s speech came during his visit to the NIC premises on Sunday 30th of October.2011 and meeting Dr. Sami Al- Araji and senior cadre there where he declared that the government will support an appropriate investment climate through activating the role of the one stop shop and being open to the private sector for its important role to make the investment process in Iraq a success.

The Iraqi Prime Minister expressed his big interest in the housing sector in Iraq and encouraged constructing the big full services housing complexes like Bismayah New City project which NIC is supervising within the project of building one Million Housing Units all over Iraq stressing the government readiness to support the NIC efforts in this field.
Al- Maliki also assured that such projects are contributing a lot in bridging part of the housing shortage in Iraq with moving the Iraqi economy through creating job opportunities in the various construction phases in addition to the developed look this kind of construction add to cities.
Iraqi Prime Minister added that investment process in Iraq has developed the matter that led international companies and banks to hasten the participation in the reconstruction process of Iraq, referring that there are several laws to be introduced to the Iraqi parliament for ratification which will help in establishing big strategic projects in Iraq as the infrastructure law.

Dr. Sami in his turn declared his delightedness with this visit announcing the hour 12:00 of Monday 31.10.2011 a date for ending the registration on Bismayah New City project since the number of the registrars had surpassed the number required which are 100 thousand registrars.

NIC chairman presented a detailed explanation for a number of strategic investment projects adopted by the commission adding that the confidence had been internationally increased in investment in Iraq that led to create strategic partnerships and that a number of international banks had informed the commission about their interest to fund investment projects.
Al- Araji also referred to some important legislation which is hopefully to be accomplished soon like the third amendment of the investment law and a number of legal articles within some other valid laws that contradict activation of the investment law and lead to delay the investment process in Iraq.
Prime Minister also listened to some interventions about the problems and obstacles of investment in Iraq promising to eliminate all of these through approving the required legislations and taking the appropriate decisions.