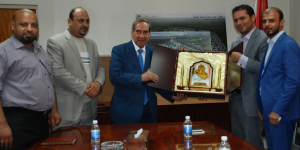 Leaks News Agency delivered NIC Chairman, Dr. Sami al- Araji the Excellence sign on Thursday Jun.11.2015, in appreciation of his role in encouraging investment in Iraq and setting up the economic development basis through running the national investment process.

During the event, Al- Araji stressed, through his speech for the occasion, the importance of the media role in clarifying truths and announcing them to the public from the reliable sources in addition to its role in supporting the governmental entities, especially the economic ones, through spot lighting the strategic projects that serve people. Dr. Sami highly praised the exceptional efforts made by the Independent news agencies to evaluate the performance of the national figures in serving the public.

The Honorium event was also attended by the Chairman and Vice Chairman of the Independent News Agencies Union with a number of the editors in chief of the union’s 25 member agencies.