Under the auspices of the Prime Minister, Mr. Nuri Kamel al-Maliki 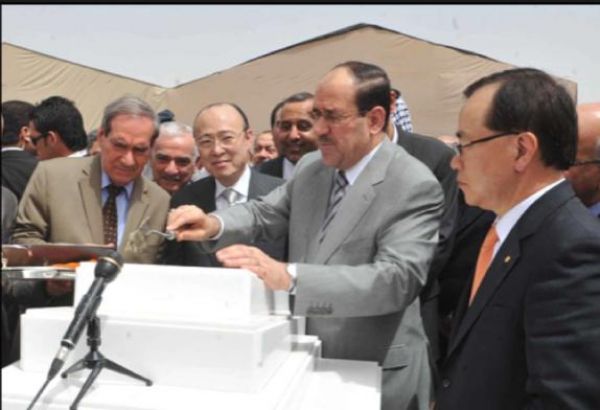 Under the patronage of Prime Minister Mr. Nuri al-Maliki has developed the National Investment Commission Wednesday, 05/30/2012 cornerstone of the City project بسماية residential building (100) thousand residential units integrated services, which is one of the largest housing projects in Iraq, which is part of the share of Baghdad, amounting to (224 thousand) and residential units within the project to build one million housing units throughout Iraq, sponsored by the National Investment Commission.

After the contract was signed implementation of the project in the building of the Council of Ministers on the same day and signed by the Iraqi side head of the National Investment Commission, Dr. Sami Raouf al-Araji, and the Korean side the President of the company (Hanwha) South Korea and in the presence of the Prime Minister, Mr. Nuri al-Maliki and President of the Board of Directors Group of Companies Hanwha .

He said the Prime Minister during a speech on this occasion that the City project بسماية modern city integrated services according to the latest international specifications and will be a model for all the provinces that have stakes in the project one million housing units, which is the start of the project the Grand National to solve the housing crisis in the country, noting that the government has made a lot of efforts and resources to support the project through the provision of appropriate prices for residential units.

He pointed out that the government has a tendency to build 200 thousand residential units distributed free to the poor and the owners of random housing to address the phenomenon of squatters will be borne by the government expenses of these units, calling on the relevant authorities to speed up the take the necessary measures to set up these projects and to create an appropriate environment to them.

For his part, Chairman of the National Investment Commission d. Sami Raouf al-Araji, said the draft بسماية is the first step on the road to the housing project of the national development and in accordance with the Five-Year Plan (2010 – 2014), which is estimated whereby Iraq’s need for housing units with two million housing units, pointing out that laying the foundation stone of this is the result of the efforts of two years of negotiations, technical and financial legal and with more than 150 international companies applied for the implementation of this project, stressing that the commission has paid great attention to the housing sector because of its economic and social role is important.

He explained that the relevant committee and the problem of the construction of one million housing units whose membership includes representatives from most of the ministries and relevant authorities, particularly the Ministry of Construction and Housing had a big role to study offers for the project and the development of determinants art and discuss every detail in order to be residential units according to the best standards of modern appropriate to the circumstances Iraq and social climate, as well as Thiah all services required for city dwellers.

He reported that the Commission reached in negotiations with the company executing the project to a common ground acceptable to both parties for the project is implemented according to the best formulas and timetable compressed standing seven years begin to receive first meal of the housing units at a rate of (1800) flat monthly starting from the month (28) of roll Until the completion of construction of the project and thus the body may have contributed to the achievement of major breakthrough for the rebuilding of Iraq and the national economy, expressing his thanks and appreciation to the Prime Minister to support the large and continuing to this project and projects of the Other, which will see the light soon on the road to rebuild Iraq, in addition to all the ministries and departments chock which contributed directly or indirectly, in order to show the project on the ground, particularly the Ministries of Finance and Housing and Construction, agriculture and municipalities, trade and higher education and scientific research, defense, interior and oil, the environment and the province of Baghdad.

For his part, Chairman of the Group of Companies Hanwha in his speech that the company will use the latest technology in the field of construction to make the city بسماية housing of the newest cities, presenting an overview of the projects implemented by the company over 60 years in various sectors, noting that this project is the largest residential project for the company Korean her out, the project will also promote bilateral relations between the two countries

The draft City بسماية new will be implemented on an area (8000) acres, and planned to be home to (600,000) six hundred thousand people, and enjoy the city with all the requirements of modern city integrated according to the latest specifications and international standards and Sthoudy city infrastructures integrated start of a road network integrated into electrical energy with stable provision of water, in addition to health and educational facilities, cultural and entertainment will all be in the service of residents of the new city is located بسماية to the south-east of the city of Baghdad and lies about 10 km from the city limits of Baghdad, on the road between Baghdad – Cote d’.