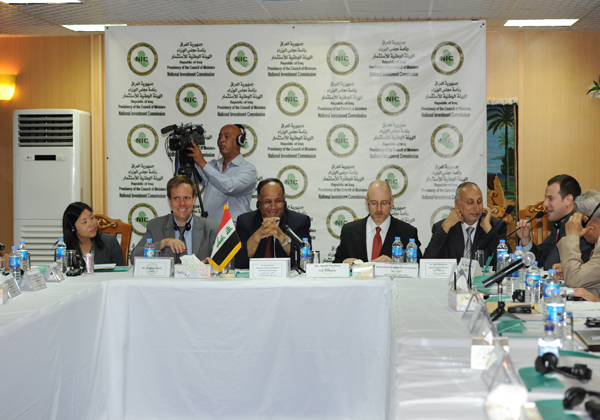 NIC organized in cooperation with the investment program in the Middle East and North Africa of the Organization of Economic Cooperation and Development (OECD) and the U.S. embassy in Baghdad a training course for drawing up the country’s image and building reputation to attract foreign investments in the period (24-25-2013)at the headquarters of NIC for the purpose of making participants acquire the expertise necessary for the process of designing and implementing strategies to build and manage Iraq’s reputation as an important location for foreign investment.
The NIC Economic Advisor, Dr. Abdullah al- Bandar, in the opening speech on behalf of NIC Chairman, Dr. Sami al- Araji, welcomed the attendees who represent provincial investment commissions and NIC as well as a representative from the Office of Deputy Prime Minister, Dr. Salih al – Mutlaq, stressing that NIC has taken a new approach to build an advanced cadre who is familiar with international expertise to contribute in reconstruction and development process of Iraq.
Al- Bandar added that the (OECD) played a great role in working to activate capacity building to attract foreign investment and change the investor’s viewpoint towards Iraq from a country of conflicts to an investment attracting country , adding that advantages have been taken from the experiments presented by the OECD through a series of seminars and meetings which have been held since 2007 indicating that this is the second course held by (OECD) in cooperation with the U.S. embassy in Baghdad where participants received lectures about new methods in attracting investors through new practices to influence investors decisions concerning the location as well as putting a plan to build and manage Iraq’s reputation with the necessity of activating partnership with the private sector through (PPP) program .
For his part Mr. Anders Johnson, Iraq project coordinator in (OECD) expressed his happiness to launch such a training course in Iraq after it was held in the neighboring countries , praising the NIC role to create an advanced cadre who have a clear vision on how to attract investment companies to Iraq and change their viewpoints about it because Iraq is a highly attractive investment destination for enjoying a strong consumer market as well as the availability of raw materials , and labor force which can lead in the end to diversifying the national economy.