In order to increase the size of German investment in Iraq 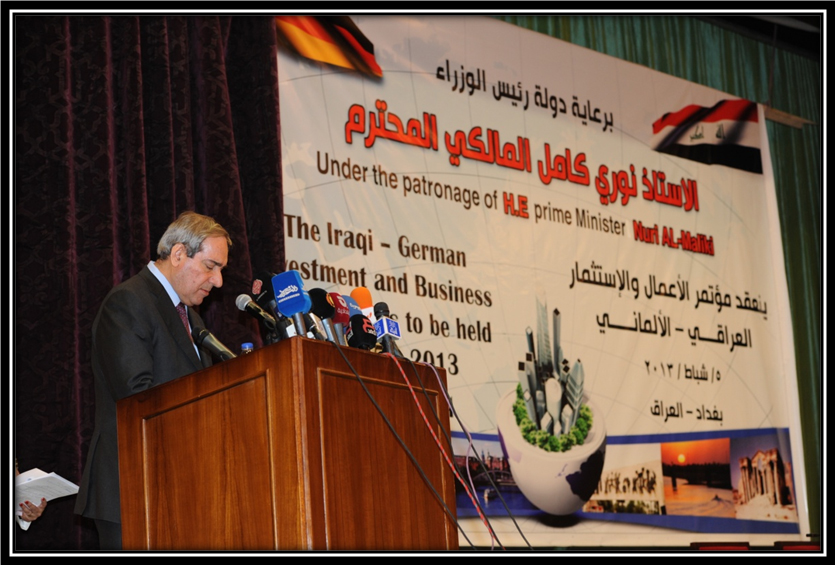 Under the patronage of H.E Prime Minister Nuri al-Maliki the National Investment Commission held Business and Investment Conference in Baghdad on the 5 th Feb, 2013 with the presence of Deputy Prime Minister Ruz Nuri Shawis and German Transport Minister (Peter Ramsawr) and Iraqi Transport Minister Hadi al-Ameri in addition to the German MP Mrs. (Dagmar Worrell) with the representatives of more than (50) German companies, as well as a large number of officials and businessmen in both countries in order to promote economic relations between the two countries to serve the common interests. Dr. Sami Al- araji ( NIC Chairman) In his opening speech confirmed that NIC has paid special attention to the issue of attracting national and foreign capital. In addition to the international companies to contribute to the reconstruction of Iraq. NIC worked with government entities and parliament to provide legal protection and tax exemption through amendments to the Investment Law No. (13) For the year 2006 to give the best opportunities for investors.
he also explained that the amendments included introducing the developer concept who will establish and manage investment zones ,residential cities as well as safe investment areas allowing the investors in these projects to enjoy the benefits of investment license from the date of its issuance and not from the date of issuing the license of the original developer, to set up a fund to support investment that enjoys legal personality to be connected with NIC enabling the latter to finance investment projects and participate in them, and raise the ceiling of the tax and customs exemptions to cover the entire duration of the project until reaching the stage of commercial operation, requiring ministries to allocate land put up for investment for NIC to be included within the investment map and, compensate the investor for the investment project in the event of nationalization or expropriation under the rule judicial, as well as the repeal or amendment of several laws that impede or do not fit with the provisions of the Investment Law. Al- Araji added that the government realized that any success of the investment process in Iraq requires the developing the banking and financial sector, that’s why the government has started the process of restructuring and modernizing the sector, that consists of (41) banks including (7) governmental and (34) private ones in order to comply with the work of international banks and provide the requirements of success to the investment process, as well as providing efficient banking rules that could contribute to supporting investment and the free market economy, in addition to starting the Iraqi exchange practicing its role in attracting investment that using the electronic trading system as applicable in global stock markets. Regarding the housing sector and real estate development, the NIC Chairman said that Iraq needs three million housing units over the next ten years, and as a result NIC has embarked on a program aims to build one million housing units through private investment where efforts has culminated to sign a contract with Hanawah company , South Korea one, to build Bismayah new city which is located in Baghdad with a capacity of 100 thousand housing units with a total cost estimated at about eight billion dollars. H e also referred that NIC is about to sign an investment contracts to build new cities in Karbala (Dhifaf Karbala city with a capacity of 40,000 residential units)and in Baghdad (developing Al-Rasheed Camp to be a housing city with a capacity of 70,000 residential units and a project to build the future city with a capacity of 30,000 thousand housing units and the construction of 20,000 thousand residential units in al- Dabbash area in Baghdad), in addition to great opportunities to invest in various economic sectors (telecommunications, transport, industry, education, health, etc.).Indicating that Iraq and through the expectations of a number of international economic institutions will be among the ten fastest-growing economies in 2013. In his turn, Deputy Prime Minister ,Ruz Nuri Shawis, said that the government is ready to provide all kinds of support to German companies and to overcome all the obstacles they might face in Iraq, referring that the focus of Iraqi government is to bring foreign investments and stimulate business and diversify its sources of funding during activating industrial and agricultural sectors that enable foreign investment to play an important role in this area to achieve the desired development. At the same level the German Transport Minister (Peter Ramsawr) in a speech showed his gratitude to the warm hospitality and reception for the visiting delegation and conveyed the greetings of the German government to the Government and people of Iraq, noting that the conference in Baghdad is of great importance after the first conference in Germany several months before to strengthen the bilateral relations, declaring at the same time the readiness of the German government to provide assistance to Iraq in all fields and to enter the investment process and participate in the large projects in the way that enhances economic cooperation between the two countries. On the margins of the conference three discussion sessions were held ,the first one discussed the available investment opportunities in Iraqi transport sector , the second session was dedicated to discuss the investment opportunities in the construction and housing ,Water Resources and Urban Development sectors while the last one dealt with the investment opportunities in the Iraqi manufacturing sector . This conference was attended by representatives from ministries of (Finance, Oil, Electricity, Construction and Housing, Planning, Industry and Water Resources) in addition to Members of parliament, governors, and heads of provincial councils and chairman’s of provincial investment commissions. The conference also witnessed effective presence by government organizations ,civil society organizations, Arab- German Chamber of Commerce, Federation of Iraq Chambers of Commerce, Iraq Federation of Industries, , Iraqi businessmen Union, Iraqi National Business council, Independent economic grouping, Iraqi Banks Association and Union of Arab Contractors