With the attendance of the Iraqi and Lebanese Ministers of Telecommunications 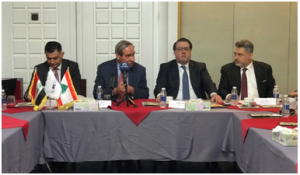 A series of elaborated meetings have started in Baghdad on Sunday 10.03.19 that included the representatives of the elite of the biggest Lebanese companies in various economic fields. the companies representatives arrived to Baghdad within the official delegation that had accompanied the Lebanese Minister of Telecommunications- Dr. Muhamed Shuqair who participated in the event that was attended by the Iraqi Minister of telecommunications- Dr. Naeem Al- Rubaiee, NIC

Dr. Sami Al- Araji said in his opening speech that the coming five year and ten year economic plans include in their most prominent sides transforming the substantial sectors in Iraq in to productive ones that achieve profits for the state through an investment map previously drawn for this purpose with restructuring Iraqi private sector capable of holding itself by focusing on small and medium size projects in all sectors.

In addition to the availability of strict and strong financial and monetary administration that depends on the convert of important state financial institutions from the paperwork trading into the electronic system in cooperation with different international institutions in a way that grants minimizing administrational corruption risks and achieving important financial revenues to the State.

Dr. Sami also noted that opening more than 20 border outlets in Iraq can contribute a lot to the economic opening up required and it provides the opportunities for more disciplined borders.

NIC Chairman also assured that there are important economic achievements that shall inevitably be clear within the (100) day period specified by the Iraqi Government that is subject to direct and detailed follow up by H. E. prime Minster till reaching the desired goals to leverage the Iraqi economy.

The Lebanese Companies were invited to take their role in the Iraqi Market in a way that is consistent with the historical and social relations between the two countries.

Dr. Naeem Al- Rubaiee, Minister of Telecommunications reviewed the most important investment opportunities available in his ministry and investment types and modes that are ready for companies to enter through in the various specializations.

The Minister added that the Ministry has infrastructure projects in addition to the opportunities of establishing the transit companies, mail charging between provinces,

electronic gates projects and others clarifying the possibility of cooperating with the Ministry either directly or through specialized companies in the fields of IT and mailing companies in different investment forms between the public and private sectors .

Dr. Mustafa Al- Heti, Chairman of the Damaged Areas Reconstruction Fund clarified that the Fund is working through the Financial resources provided by the federal budget and loans and grants to reconstruct and rehabilitate the areas damaged by terror acts hoping that the coming 10 days may witness the announcement of more than 440 investment projects in different sectors within the campaign of reconstructing these areas.

Mr. Ziad Badr, Head of IFC office in Iraq stressed the strategy of his institution which complies with the WB strategy that supports the non- oil sector in Iraq through eliminating the obstacles that face the local and foreign private sectors and optimizing the investment environment through agreements made with entities like NIC with concentrating on the development and reconstruction sectors targeting the Iraqi investor inside and outside Iraq.

The Lebanese Ambassador, Mr. Ali Al- Hahab who had attended the event announced his country intention to open the office of the Chamber of Trade and Industry to foster the Iraqi- Lebanese relations and to provide the Lebanese companies with the required information. 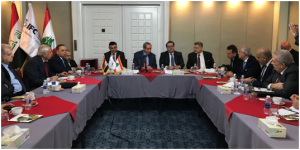