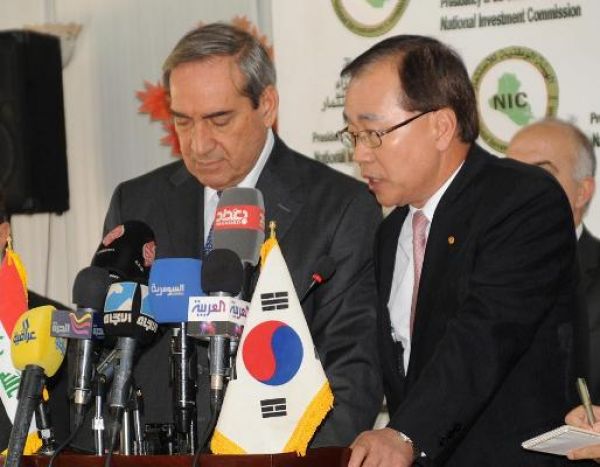 NIC announced finalizing the fundamental designs for the project of building (100) thousand housing units in Bismaya on a total area of (8 thousand Donums) and to be inhabited by (500- 600) thousand Iraqi Citizens.
Dr. Al- Araji, NIC Chairman said in a press conference held for this purpose that this city will be constructed according to the latest international standards with full services (schools- clinics- commercial, social and entertainment centers).
Dr. Sami added that the forthcoming weeks will witness announcing the start of registration by employees to know the total number of those willing to buy these housing units of (100 m², 120 m², and 140 m² areas) with three rooms for each.
Dr. Sami also highly praised the special efforts done by the Iraqi and the Korean sides in this project which is the result of the agreement signed on the 25th of May.2011 as an Iraqi team had worked with the Korean side which included members of the Iraqi Ministry of Housing and Construction and other Ministries and universities and in the forefront the University of Technology.
Dr. Sami also referred that registration to buy the housing units will be electronic as a link will be found on the NIC website that is devoted for this purpose and contains all information regarding this project so as to avoid any problems that could happen during the registration process, while the application format will be sent to all ministries and Baghdad Governorate to know the number of people willing to buy these housing units.
And about the implementation periods and costs of these housing units, NIC Chairman made clear that Iraqi citizens will be able to live in this city in the third year of implementing the project when the first (20-25) thousand units will be ready while adding (20-25) thousand housing units yearly until completing the whole 100 thousand units agreed upon with simultaneously completing the services, commercial, entertainment and educational institutions needed.
Mr. Hyun- Chung Kim, Vice Chairman and CEO of Hanwha Engineering and Construction Co. said in his turn that exceptional and special efforts had been done since signing the agreement until finalizing the fundamental designs of the project as the company had assigned a specialized work team for this project that consists of 100 engineer in several fields and he also assured that the company is keen to construct the housing units according to the accredited international standards .
Worth mentioning that the contracting procedures for the project will be guarantying the two sides rights while the citizen’s right will be guaranteed through a detailed contract and all information about the project will be available for the public through the media campaign which will start soon for the project that is considered the first international contract of this size in Iraq.