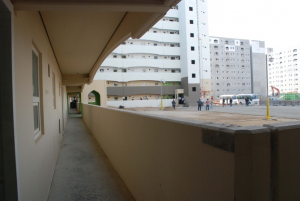 NIC arranged an expanded field tour in Bismayah  for more than 70 of registrars and those willing to register to buy housing units in Bismayah New City project on the 20th of Nov.14 in order to make them see work progress .

An official source in the National Investment Commission stated that this tour comes as one in a series of periodical tours arranged by the commission to let people see the work mechanisms and to find answers for all their inquiries and also to discuss their suggestions with the executing company representatives, the source added that the tour started by assembling people in the sale center in Baghdad International Fair wherefrom they were transported by buses to the project site which is 10 km far from Baghdad administrative borders.

The NIC source said that the tour had witnessed presenting a short movie that talks about work stages in the project followed by a tour in the pre casting concrete factory which is considered as the biggest in the middle east with detailed explanations submitted by the specialized engineers , the visitors continued the tour to reach the 1440 accomplished housing units in sector A1 where they met the in charge engineer who answered all their questions and most important of which is the procedures taken to construct the new high way connecting the city with the center of Baghdad, dates of delivering the housing units in the serviced sector, and the administrative system to be adopted to run the city after it is fully accomplished.

The administrative manager of the project, Mr. Suesatek Kim warmly welcomed the visitors assuring that the project is progressing smoothly and according to plans agreed upon adding that Hanawah Co. is highly pleased to work in Iraq and is willing to leave good effects in Iraqi people hearts, Mr. Kim also presented his gratitude to the National Investment Commission for the great support it is submitting to make this project a success.

The NIC media office polled the visitors opinions and it came as follows; Mr. Ghassan Deshar, a journalist, said that he noticed clear progress in the project and that he had previously visited the site with a number of journalists the matter that pushed him to accompany his family this time to see the progress achieved.

While Ms. Ibtisam Muhammed, an employee in the Rafidain Bank, highly praised the situation reached in the project that had exceeded her expectations expressing her happiness to be one of the registrars to have such modern housing unit in such modern city and her pride with this big national achievement.

The tour was ended with taking memorial shots for people with a number of NIC and Hanawah Co. officials.