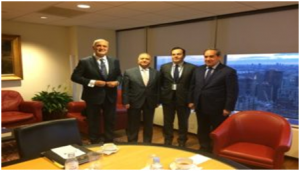 NIC Chairman stated that Iraq had put Italy within the prioritized list of countries that will participate in the 2018-2023 plan of reforming economy and reinforcing the private sector role, in light of the historical relations between Iraq and Italy. The two sides also discussed some of the issues of mutual interest in the Security Council when Mr. Al- Hakeem expressed the delight in witnessing such a friendly country like Italy as a member in the Security Council. Ambassador Al- Hakeem also showed the gratitude of Iraq for Italy efforts especially in the UNAMI meeting and the support submitted as well as the efforts of maintaining the dam of Mosul and its big participation in protecting and repairing the Iraqi archeological pieces.

Mr. Vincenzo Amendola in his turn assured Italy’s firm obligation support towards Iraq in its war against terrorism, adding that Italy is concerned about the efforts of repairing the archeological pieces because they look at it from a civilization and cultural corner within the Mediterranean area . In respect of the economic reform plan referred to by the Iraqi side , Mr. Amendola said that they will be willing to urge the Italian companies to participate if they find the plan feasible after treating the topic of the Iraqi Budget price calculation.