NIC Chairman, Dr. Sami AIaraji The private sector is an important partner in the process of rebuilding Iraq. 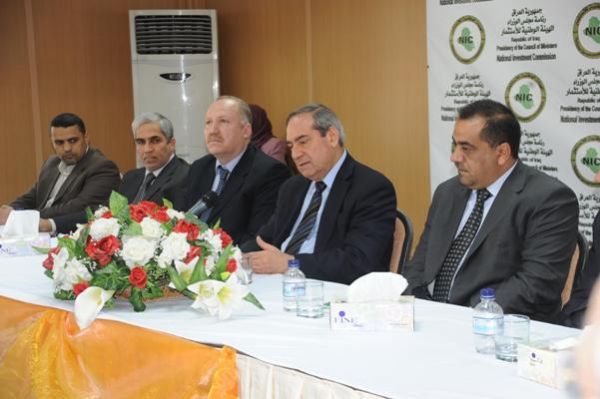 During a meeting with the Heads of Union of chambers of commerce in Iraq the
NIC Chairman, Dr. Sami AIaraji ….. The private sector is an important partner in the process of rebuilding Iraq

The chairman of NIC said that the existence of database or Bank of information includes all the economic data in the private sectors taking into consideration the miscellaneous function in all provinces is an essential and an urgent matter to develop the private sectors.
He added during the meeting held with the Union of chambers of commerce that the Union represents the most important player in the economic process in Iraq and also plays an important historical role in economic policy. AIaraji hailed the history of the private sector in Iraq presented by the economic and commercial entities such as INBC which includes more than 100 businessmen. AIaraji also stressed the importance of participation of all representatives of the private sectors in the organized economic activities inside and outside Iraq to reflect a deep investment and economic vision expressing positively the activities of the private sectors in Iraq .Regarding the cooperation with the big international organizations which seek to benefit from the experience of the private sector in Iraq he referred to the importance of making alignment between the private sector in Iraq and some international organizations that have their conditions and requirements which can open new horizon in the free economy in Iraq. He stressed the importance of sustainable relationship between the two parties and not limited to attending the forums and conferences only which help to attract these international gatherings through professional organization, foreign and domestic, owners of capital and businessmen who present our substrate abroad and contribute to attract the companies to enter the Iraqi market through their contact and acquaintance with the private sector in Iraq. on the other hand the chairman of NIC explained that the big and important projects waiting for the private sectors such as investment projects and deferred payment as well as the investment partnerships with the public sector which became a vast field for the private sector and he confirmed the importance of the cooperation with the provincial investment commissions to play an important role in the economic development of provinces to produce the best services for the citizens. From his part Mr. Gaffer -Alhamdany, the chairman of the Union of Chambers of Commerce, submitted a detailed historical presentation about the Union of Chambers of Commerce in Iraq that was established in 1889 including more than million merchants and (176) thousand registered company. He also expressed the readiness of INBC to build bridges of cooperation and put all abilities of the union under the disposal of the government and NIC which sponsors the private activity in Iraq to participate in the construction, stressing the union’s constant need to support the government materially and morally to involve the union with its representatives in the investment activities inside and outside Iraq which contributes to develop their abilities and experience. At last Alaraji listened to some suggestions and opinions of the Heads of Chambers of Commerce in the provinces which are related to investment in the various sectors as well as the participation of Chambers of Commerce in the investment opportunities in cooperation with the provincial investment commissions and facilitating their tasks in building and reconstruction also the NIC promised to address all problems in coordination with the concerned entities.