In an expanded press conference held at the NIC premises 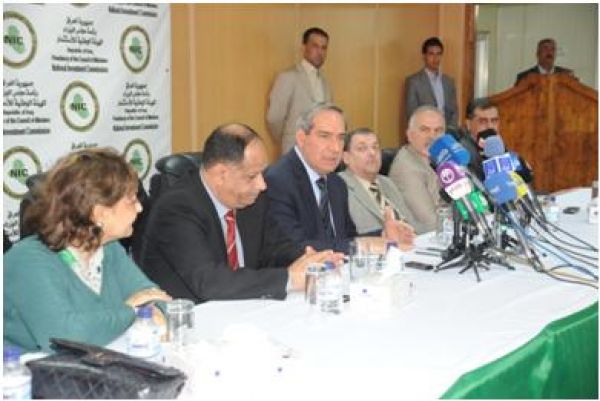 NIC Chairman, Dr. Sami Al- Araji assured that the negotiations with Hanawah Korean Co. regarding the implementation of Bismayah New City had reached its final stages expecting that the next few weeks shall witness signing the contract after ratifying it by the council of Ministers to start the implementation.

NIC Chairman added, during an expanded press conference held at the NIC premises on the 12th of Feb.2012, that Bismayah New city project is part of Baghdad housing units’ quota which is (244 thousand) housing units that forms a start for the 1 million housing unit project announced by the NIC to meet part of Iraq housing need which was estimated by the Ministry of Construction and Housing to be 2 million unit. Dr Sami said that the negotiations with the implementing company is moving in the right path through the continuous meetings, despite the delay, as the NIC was keen to find a contractual form that ensures and protects the citizen, the government and the implementing company rights in order to make this project which is one of the biggest in Iraq and the region a real success.
Dr. Sami highly praised the big role of other ministries like (Finance, Housing and Construction, Municipalities, Higher Education and Scientific Research) for the support they provided to the NIC and their participation in pushing negotiations forward in addition to the great job made by Al- Rafidain, Al- Raheed and the TBI banks ensuring the project success.
NIC Chairman declared that Hanawah Co. had pledged to complete the project infrastructure within two years alongside with building 1700 housing units monthly expecting completing 20 thousand units within the first three years and then the rest of the units respectively.
Regarding amending the investment legislations, NIC chairman assured that there is a big progress that had taken place in the Iraqi legislative environment like the amendments made on the investment law No. 13 of the year 2006 and Statute (7) for selling and leasing state properties for investment purposes while NIC still seeks making new amendments on these legislations in a way that commensurate with the forthcoming stage of the Iraqi development process.
In a related framework, NIC chairman asserted that the one stop shop department is working hard to minimize the routine chain for investors so as to grant the investment license as soon as possible calling for other ministries to give their representatives in the one stop shop broader authorities enabling them making the needed decisions.