NIC Chairman: Energy Sector is one of the pillars to achieve the Sustainable Development in Iraq

NIC Chairman: Energy Sector is one of the pillars to achieve the Sustainable Development in Iraq 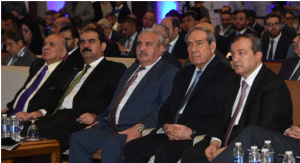 NIC chairman assured that the Energy sector is regarded as one of the most important pillars of the process to achieve the sustainable development in Iraq aimed at in 2030 development plan to which Iraq adhered in front of the united nations.

This statement came during his participation in the works of the second day of Iraq Energy Forum 2019 in its fifth session attended by deputy Prime Minister for Energy Affairs, Minister of Electricity, Minister of Water Resources, Head of Energy Parliamentary Committee and the president of GE Company.

Dr. Sami added that the NIC with the concerned Ministries have already adopted this sector to construct Iraq for the next 10 years explaining that the role of the NIC considers three axes, first; finding new incomes for Iraq through a number of productive economic sectors like (Oil, Gas, Electricity, Industry, Agriculture, Transport, Telecommunications, Tourism) to participate in the servicing sectors while the second axe is related to the reforms in the State Owned enterprises and the strict Financial and monetary administration with activating the role of the private sector in the small and medium size projects coming to the third axe that concentrates at maximizing the local and foreign investments in order to expand and diversify the resources and cover part of the ambitious plan requirements.

NIC chairman also stressed that the energy sector will provide financial resources for the country to provide the Iraqi Citizens with the services after the expansion in Oil & Gas Sector and the Electricity production in all its types as fixed in 2030 sustainable development plan, praising the big role of the local investor in providing the power that contributes by 50% of the total current power production in Iraq to reach 8500 MW and by the completion of the expansions in Bismayah power station it will reach to 10,000 MW.

The second day of the conference also witnessed the signing a contract between the Ministry of electricity and Mass Holding Company for the expansion of Bismayah power station to produce 4500 MW which shall cover more than 80% of Baghdad need to be the biggest power station in Iraq, the conference also witnessed signing a contract by the Minister of electricity and the head of the Gulf states Connecting Commission for inserting Iraq in the Gulf states power Connecting system through extending an electricity line of 300 KM 220 of which in Kuwait and 80 KM in Iraq.