NIC Chairman: Most of the Investment Companies are continuing their activities in Iraq including Bismayah project Executing Company

During his Participation in the Economic Mobilization Conference

NIC Chairman: Most of the Investment Companies are continuing their activities in Iraq including Bismayah project Executing Company 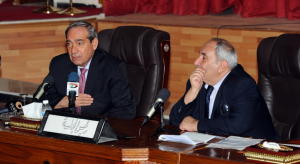 During the conference held by the General Committee of Integrity in coordination with the NIC under the slogan of “the Economic Mobilization is a vital source to support official efforts to overcome Terrorism” , NIC Chairman, Dr. Sami Al- Araji assured that most of the global companies working in Iraq are still going forward in implementing their different projects and at the forefront of these companies is Hanawah South Korean company executing Bismayah New City project.

NIC Chairman added that the recent military actions Iraq had witnessed affected certain provinces, the matter that led to temporary withdrawal for some of investment companies due to the shutdown of borders outlets of importing equipment and raw materials for these companies stressing that the stoppage shall continue for a temporary period as NIC is working continuously to meet with these companies and their countries ambassadors in addition to provincial investment commissions and the Iraqi private sector to lay down plans and draw a road map in consistence with the forthcoming phase.

Dr. Al- Araji also said that NIC is comfortable with Iraq economic status denying all tendentious rumors broadcasted to distort the image of the Iraqi economy and confirming that work is proceeding well especially in the middle and southern provinces while adding that NIC had directed provincial investment commissions to document the continuation or withdrawal of companies to discuss the relative economic and legal aspects of each situation.

NIC Chairman stressed the importance of the role played by the Iraqi private sector in economic mobilization through supporting defense fronts and supplying them with what they need of food, clothing and other supplements by donations or big facilitations adding that one of the most big challenges that NIC faced is closing roads and border outlets the matter that was solved by the private sector which suggested opening new outlets especially with Iran.

Meanwhile, Dr. Al- Araji praised the role of the economic organizations and unions which were able to control vital commodities prices in the Iraqi market especially those that enter within Iraqis everyday life indicating that there is an operation room that works around the cloak in coordination with the private sector to deal with all developments might occur on the ground.

The conference was attended by Chairman of the General Committee of Integrity, the Judge Alaa Jawad Al- Saaedy, the economic advisor in the Prime Minister office Dr. Abdul Hussein al- Anbaki, Deputy Ministers of Planning, Dr. Mahdi al- Alaq and Dr. Sami Maty in addition to a number of Ministries and Unions representatives.