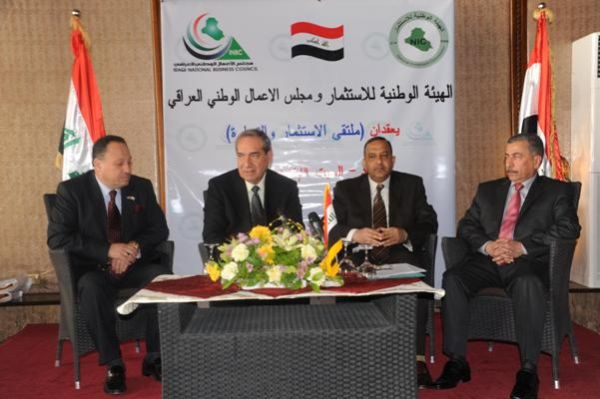 During Heading the Investment and Trade Forum for Supporting the Private Sector
NIC Chairman .. We work to Create Economic Partnerships between Iraqi Public and Private Sectors

NIC Chairman, Dr. Sami Al- Araji assured that the commission is working hard to motivate the self funded productive sector to be companies ready to compete after rehabilitating and restructuring these companies in order to support the Iraqi private sector to take its important role.
He added, during the opening remarks of the Investment and Trade Forum on the 9th of

April.2011 organized by NIC in cooperation with the Iraqi National Business Council through
which NIC hosted the elite of the Iraqi businessmen residing in UAE (the Iraqi Business Council in Abu Dhabi), that There are a number of fundamental bases which are worked on heavily and continuously represented by implementing the huge development plan first laid down after 2003 that concentrates on how to achieve integration between the country’s resources and what kind of investment could be attracted to reconstruct the country in harmony with the five year plan 2010-2014 which concentrates on infrastructure and the main economic development projects which estimated cost is 186 Billion $, 100 billion $ of which had been allocated from the capital budget (Oil revenues) while 86 billion $ cost projects will be announced for investment in different forms. Dr Sami also referred to the investment map which NIC is serious to update for the third time with the intention to make the updates in a half yearly manner to monitor all developments assuring the importance of reconsidering the concept of small and medium industries and ways of financing them and how it resurrect the idea of establishing (Investment Fund) adopted in many countries especially oil producing ones.
Mr. Ibraheem Baghdadi, Chairman of the Iraqi National Business Council referred, in the speech he gave during the Forum, to the development touched in the investment process in Iraq and the big opportunities offered to investors in various fields which makes it a successful experience especially after the courageous decisions ratified by the Ministers Council and the Parliament helped by NIC and INBC
Vice Chairman of Economy and Investment Committee in the Iraqi Parliament, Mr. Muhammad Salman Al- Saady presented the most prominent features of the new economic philosophy which gives the private sector high importance in the economic process through the articles of the Iraqi constitution which guarantees the reform of the Iraqi economy according to modern economic basis, assuring that the economic and investment committee in the Parliament works in an organized way with the executive sides in charge of investment file in Iraq especially NIC in order to specify laws and legislations that put obstacles in the way of investment in order to reform them and submit them to the Iraqi Parliament to be ratified in a way that serves to make the Iraqi investment process a success.
On the sidelines of the second session of the Forum (the Ministry of Trade role in supporting the private sector) Mr. Ali Al- Dabagh said that the government is paying special attention to the Iraqi private sector to make it a strategic partner in the investment process and not only an agent or service provider encouraging the idea of establishing investment funds since it will represent savings that contribute to bridging the deficits in the important economic fields.
NIC Chairman presented during the works of the first session of the Forum the investment opportunities available in Iraq and the possibility of participating in these opportunities in 10 vital sectors (Oil & Gas, Industry, Agriculture, Telecommunication, Transport, Education, Health, Housing, Infrastructure, Electricity and Tourism) in addition to that a presentation of the valid laws and legislations was also given .
Worth mentioning that two of the members of the Iraqi Parliament Dr. Salman Al- Musawi and Mr. Ibraheem Al- Rikabi attended the Investment session while the second session was attended by the member Abdul Abbas Al- Saaedy and Ms. Suwaiba Zangana, Trade Deputy Minister.