In direct order from Prime Minister 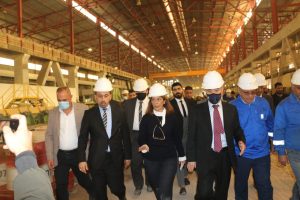 NIC Chairwoman, Suha Dawood Najar, announced starting the first tour of following up and supervision of finishing the works of constructing and rehabilitating the complex of Iron & steel and Steel Rolling plants in Basra province after ensuring the required funding from the investment budget for regional development.

Najar said, during an elaborated field visit for the industrial complexes and other projects in the province on Saturday 16.01.2021, that the supervision works came after forming a joint committee that included in its membership the Ministry of Industry and Minerals, the State Company for Iron and Steel, and the National Investment Commission, according to the directives of the Prime Minister, which role will be technical supervision and field following up  for the referral works and providing all sorts of support required after ensuring the funding required for rehabilitation..

Najar added that this big industrial edifice that operates more than 4500 worker of various specializations can contribute to moving the province economic wheel and absorb a high amount of manpower in case of its rehabilitation to work in its design capacity agreed upon in the contract, assuring that the referral works shall be finalized within minimum time that not exceeds one week to one of the advancing companies..  all this came during a meeting was held in the beginning of the tour with the attendance of the technical deputy minister of Industry and Minerals, Mr. Adel Kareem and DG of the State Company for Iron and Steel, Mr. Abbas Hiyal. 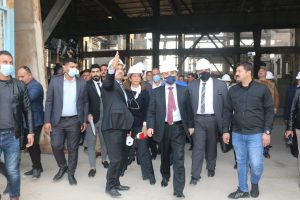 Project manager, Eng. Jawad Kadhum Jaafar, said that the achievement rates for the steel rolling plant reached 84% with 75% of equipment installing works completed while the achievement rate in the Iron and Steel plant reached 76% with the readiness to start the works of installing equipments after finishing the civil works, referring to reaching an agreement with the South State Company for electrical distribution to provide the needed power for the project in addition to agreeing with the South Gas Company to provide natural gas given that water supply is ensured from Shat al- Arab river. He added that the rehabilitation works will be totally implemented by Iraqi hands after finishing the operating works by the manufacturing company expecting that this year shall witness actual production from the steel rolling plant after the referral works are finished.

On the same context, Eng. Haider Taher Jasim, DG of Ibn Majid State Company, one of Ministry of Industry and Minerals affiliations, said that his company is seeking participation in the works of installing the plant of Iron and Steel to be re operated with in the coming 6 to 8 months, as the site and equipment have been studied and a full offer has been presented to the State Company for Steel and Iron and the Ministry of Industry and Minerals and he expressed his hopes for their offer to seize approval if it can serve the province, the country and the national industry…

Basra tour also included meeting with Mr. Asaad al- Edani, governor of the province, who welcomed the projects of developing and rehabilitating the big industrial complexes in the province for what they represent of promising job opportunities for the province population, and the two sides agreed to conclude an understanding to fund the project.

The tour included visiting a number of investment projects in Basra among which was Al- Rumaila Gas and Steam Power Station which hopefully expected to enter service next summer, the matter that shall reinforce the supply capacities for the province.

Regarding the investment licenses granted by NIC for al- Narjis Co. which was the fifth station in the tour, DG of OSS dept. in NIC assured that the Commission granted three investment licenses for al- Narjis Co. , the first to build a complete industrial zone with actual achievement rate of 30% and to be fully implemented within the next 6 months on total area of 40 donum and shall provide around 500 job opportunities and the other two licenses for constructing two housing projects which will be provided by construction materials manufactured in the aforementioned industrial zone.