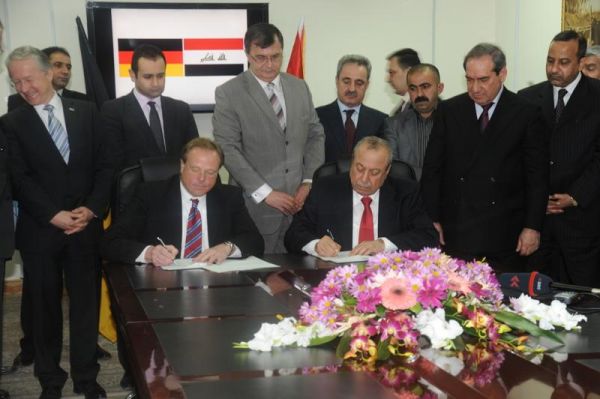 A ceremony was held on the NIC premises in Baghdad to sign a MOU on economic development between Iraq and Germany; Iraqi side was represented by Mr. Rodg Nori Shawees, Deputy Prime Minister while the German side was represented by Mr. Dirk Niebel, German Minister of Economic Cooperation and Development.
H. E Mr. Rodg NOri Shawees had given a speech through which he welcomed the visiting delegation and stressed the serious desire of the Iraqi Government to reinforce the joint cooperation with Germany calling for the German companies to hasten their existence in Iraq for the good reputation these companies used to be enjoying in a way that serves developing means of economic, investment and commercial cooperation in all sectors between the two countries.
In the same context, NIC Chairman, Dr. Sami Al- Araji asserted that the signed agreement will enhance joint cooperation between Iraq and Germany and in the same time it represents the serious efforts to create sustainable economic partnership in various fields on both short and long terms, adding that the German side had proposed the idea of establishing what can be called the German House as an attracting center for the German companies to work in Iraq.
Dr. Sami also discussed receiving a bigger delegation of the German companies next March to complete the discussions series between the two countries stressing that NIC is welcoming all countries willing to cooperate with Iraq in economic and investment fields and ready to submit all facilities for the success of the agreement between the two countries.
The German Minister, in his turn had conveyed his gratitude and appreciation for the warm reception meant to the German delegation referring that Iraq must be a proud country for the democracy it is enjoying and for maintaining human rights and peaceful coexistence that ensure a strong cohesive society.
Head of the German Industries Union, a delegation member said that German companies are keen to work in Iraq and had shown his hope for this visit to provide the appropriate ground for joining the ongoing investment process calling for businessmen in both countries to exchange opinions and ideas in different economic fields to create a real partnership between the two sides.
Mr. Ibrahim Baghdadi- representative of the Iraqi private sector stressed in his turn, the desire of the Iraqi businessmen to open contact channels with the German side in all sectors.
Worthwhile to mention that the German Minister was accompanied by a delegation that included parliamentary and Economy figures in addition to several German media organizations representatives.