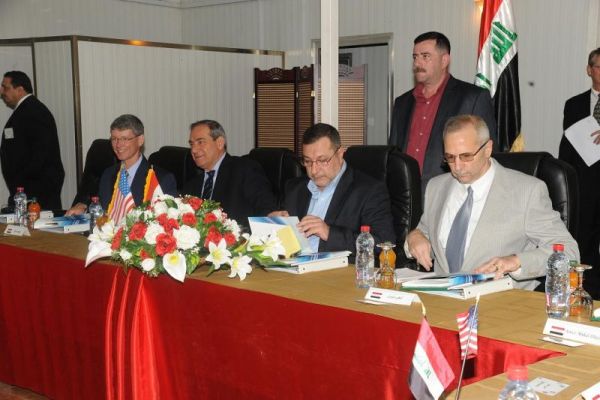 A workshop to improve and regulate the electricity system in Iraq was held in the NIC premises in Baghdad on the 16th of May 2011 in coordination between the Ministry of Electricity, the NIC, USAID and the Economic section in the US Embassy.
The workshop works was opened by a speech for the Minister of Electricity Mr. Raad Shalal through which he presented his Ministry’s central plan for the years 2011-2015 for comprehensive and central reconstruction process of electricity system that is compatible with global standards with a clear vision for the needs and priorities of the electricity sector on the short and long runs explaining that this plan is depending on two key sectors, the first is represented by rehabilitating the working power producing stations while the second is concentrating on constructing new power stations (Gas, steam and Diesel).
Minister of Electricity also mentioned that in order to treat the current shortage in supplying the electrical power for consumers the Ministry had laid down an urgent plan to insert 5000 MW of diesel units to be operating during the 2012 summer, hoping that establishing these units will provide additional six hours of power supply to reach the extent of supplying 16 hours/day by 2012.
NIC Chairman in his turn assured that the electricity sector is a key vital one and there are different visions of how to run it economically and administratively within the state trends of adopting the market economy.
In this context, NIC had always been careful to host the elite of those concerned in the Ministry of Electricity, USAID and the economic section in the American Embassy in order to discuss how to make real development whether in administrative or economic side to ensure reaching the citizens’ actual need noting that this project is the start that will take several years and that reforms had started in production and have to extend to include transmission and distribution of power.
Mr. Adel Hameed, the MOE advisor assured that the Ministry had announced its investment plan that aims at adding 2750 MW for locations in Shat Al- Basra, Umara, Samawa and Diwania, in this concern, efforts had been done in cooperation with NIC and the Ministry is in the process of announcing the wining offers as the forthcoming short term will witness announcing the final candidate for each station of the four.
On the same context, Mr. Allen Aisne, the USAID expat presented some of the forms globally adopted and suggested to improve electricity sector in Iraq which include establishing new governmental departments for electricity and privatization according to six years administrative contract to overcome the electricity shortage with adopting some of the competitive forms that had succeeded in a number of the world countries referring in the same time to the importance of taking in to consideration some important points in improving the electricity sector like the computerized system of price determining in addition to examining the individual purchaser system adopted all over the world.
The meeting was also attended by Mr. Dell Abler, the economic council in the American Embassy in Baghdad.