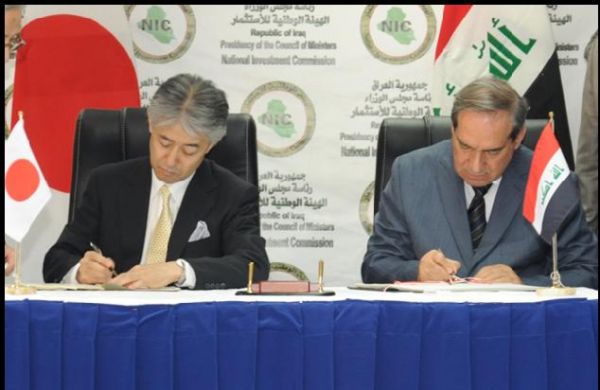 Aiming at Pushing the Cooperation Wheel forward between the Two Countries

NIC Chairman, Dr. Sami Raouf al-Araji, representing the Iraqi government signed on Thursday, 7/6/2012 the (Investment Promotion and Protection Agreement between the Government of the Republic of Iraq and the Government of Japan), while the Government of Japan was represented by its ambassador to Iraq, Mr. Susumu Hasegawa. The agreement aims to attract Japanese companies to enter the Iraqi market and economic partnerships with public and private sectors to contribute to Iraq reconstruction process.

The NIC Chairman assured during a speech given during the occasion that the agreement includes a number of items that provide protection to investment projects and provide all the facilities and the safeguards guaranteed by the legislations in both countries in the way that leads to the success of the Iraqi – Japanese investment partnerships and serves common interests.

He added that the agreement is to promote economic cooperation between Iraq and Japan, as well as contributing to the support of the mutual investment relations in the way that reinforces economic prosperity of the two peoples, referring that the month of June will also witness opening an office of the Japan Cooperation Center in the Middle East (JCCME) in Baghdad in order to activate the terms of the Memorandum of Understanding signed by the NIC with the center.

For his part, the Japanese ambassador in Iraq, Mr. Susumu Hasegawa said that this agreement will encourage corporations and Japanese labor to enter the Iraqi market, and will lead to the creation of an attractive environment for Japan capitals to invest in Iraq, adding that Japan give Iraq particular importance and is firmly committed to support reconstruction and development , where the two governments signed during the month of May of this year to grant new loans worth $ 750 million for the implementation of four different projects in Iraq.

The signing ceremony was attended by Iraqi Ambassador Mohammad Sabir Ismail, Head of Asia, Australizia and New Zealand in the Ministry of Foreign Affairs, as well as a number of officials in the NIC and the Japanese Embassy.