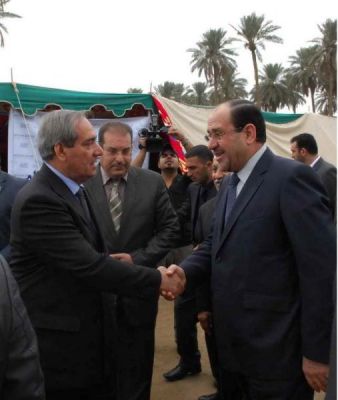 Press Statement – Ministers Council Presidency – Media Offic
Sunday 12. Dec.10
Prime Minister, Mr. Nori Kamil Al- Maliki Lays down the Foundation Stone for the Iraqi- German hospital and German Medical College Project in Baghdad
H.E Mr. Nori Al- Maliki – Irqi prime Minister laid down today the foundation stone for the Iraqi- German hospital and the German Medical college project in Baghdad.
H.E said in a speech he gave during the celebration ” We feel extremely happy when we find one project is started here and another there the matter that indicates that the reconstruction wheel has started to move on in the right direction which leads the private sector and businessmen and investing companies to compete and harry to maintain the reconstruction process.’ Prime Minister added ” the government in its own cannot gear up with all the citizen’ requirements and needs unless the private sector stands by its side and back its efforts, and if the conditions were not allowing the private sector to go ahead in the past especially security wise, so now and after achieving good amount of progress in this respect and the development of the country in various fields and under the light of the constitution and laws ratified to protect investments and providing the suitable framework to make business in Iraq a success , now doors are open for our businessmen and every one willing to participate in reconstructing the country to take his role though we defiantly can touch the competition of businessmen in the time being.
Mr. Al- Maliki went on “If the security situation was of the main obstacles for the process of reconstruction so we must now work on its maintenance and sustainability and this is of our main priorities to allow the return of international companies and businessmen.
Prime Minister Nori Al- maliki also stressed the government readiness to support the Iraqi National Business Council and businessmen and companies in all their efforts especially in the medical sector since Iraq had not witnessed constructing new hospital or medical center since 1985 despite all the national wealth it is enjoying, assuring that the state in its turn had started giving priority to this sector and this example celebrated today shall not be excluded for treatment only but also for teaching.
The celebration was also attended by the Deputy Prime Minister, Dr. Rafea Al- Easawi, the National Investment Commission Chairman, Dr. Sami Al- Araji, the Charge De Affairs of German Embassy in Baghdad, Chairman of the Iraqi national Business Council, Mr. Ibrahim Baghdadi, and the executive manager of the project, Mr. Hasan Hadad and a number of businessmen and investors and officials in Baghdad Mayoralty.