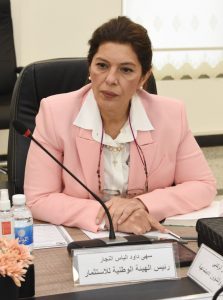 NIC Chairwoman confirmed withdrawing more than 40 Investment licenses in several provinces in various economic fields because of the delay in achieving these projects. She added that NIC is currently about collecting the remaining PICs attitudes to take the decision of withdrawing the dilatory projects licenses in their provinces.

Najar also clarified that the companies who lose licenses shall be subjects to the provision 28 from the Investment law no. 13 for the year 2006 as amended, and according to this provision the company shall receive a preliminary warning followed by a final one to eliminate the violation and in the end withdrawing the license. After the withdrawal the project shall be announced as a new investment opportunity to attract new reliable company to achieve the needed end.

PR and Media Department in the National Investment commission