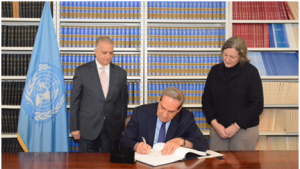 Dr. Sami Al- Araji, NIC Chairman signed on the 13th of Feb.17 the affiliation of Iraq to the United Nations Convention on Transparency in Treaty-based Investor-State Arbitration (for the year 2014) at the United Nations headquarters in New York.

Iraq is the second Arab country that affiliates to the convention preceded by 18 international members.

NIC Chairman, and through a press interview, assured that this affiliation can be considered as a clear and important message to the world that Iraq is a main center for investment and construction in the middle east, stating that this convention is adopted by the United Nations in order to preserve investors’ rights transparently in case of the rise of any disputes between investors and states.

Al- Araji also declared that Iraq had issued a number of legislations that can protect capitals and investors willing to work in Iraq spearheaded by the investment law No. 13 for the year 2006, as amended which consists of privileges and incentives for investors in addition to signing important international and bilateral agreements.