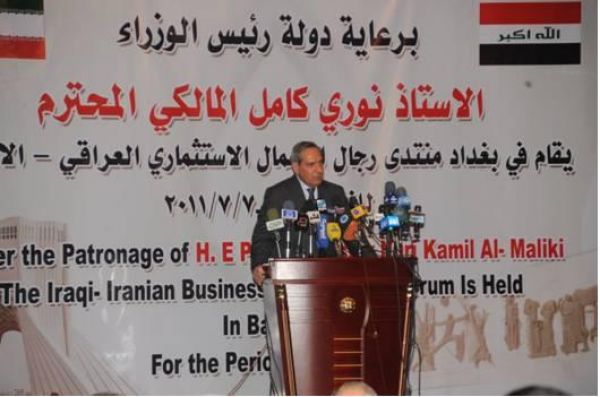 Under the patronage of Prime Minister Mr. Nouri Al-Maliki
And
Aiming at attracting investments in to Iraq
The National Investment Commission Holds the Iraqi – Iranian business and investment Forum

Under the patronage of Prime Minister Mr. Nouri Al-Maliki, NIC held the Iraqi – Iranian business and investment Forum for the period of 6 – 07/07/2011 in the presence of more than (170) company and a businessman specialists from the Iranian side and more than two hundred and fifty companies and businessmen from the Iraqi side.
The Prime Minister Mr. Nouri Kamel al-Maliki in his speech during the Forum said that the convening of this meeting is a clear message announces the beginning of a new phase of bilateral equal and integrated relations between the two countries, particularly that Iraq and the Islamic Republic of Iran have the economic, public, scientific and historical weight which makes them responsible of supporting the process of stability and security in the region.
Al- Maliki called the two conferring sides to accelerate seizing opportunities for cooperation that can be set up for this meeting, pointing out that the investment environment in Iraq has become appropriate through the issuance of legislations and laws that guarantee the investor and corporate work safety and success and legal profit, while continuing providing the legal and legislative measures amendments to ensure reconstruction process and the entry of companies.

For his part, Dr. Sami al-Araji, Chairman of the National Investment Commission announced in his opening speech (11) economic hub for joint cooperation between the two countries and in different sectors are divided into (electricity, housing, industry, tourism .. etc.), stressing that this forum will be the beginning of the distinct and significant relationship between the two countries at both the private and investment partnerships.
He explained that the Commission has provided the options available to forms of investment for companies in Iraq and Iranian businessmen and with the participation of the private sector or with the public sector or direct investment or cooperation on the basis of materials supply.
He also declared that the next few years will witness different investment partnerships between Iraq and the specialized companies in Iran, calling at the same time to exploit those opportunities to build up serious partnerships in all sectors.
To the expectation of the President of the supreme body for the development of economic relations between Iran and Iraq Hassan Kazemi Qomi, the total volume of trade exchange between the two countries during the present yea to 20 billion dollars after reaching $ 6 billion last year, stressing that this increase is the result of the development of relations between the two countries, particularly the economic relations.

Qomi expressed his country’s readiness to support and encourage the Iranian private sector to enter the Iraqi market and the creation of investment partnerships with the Iraqi counterpart in various economic sectors, including construction of plants for electric power generation of 5000 MW capacity and the construction of housing units and rehabilitate and develop institutions of the industrial, oil, and agriculture sector.
The head of the Federation of Iraqi Chambers of Commerce, Mr. Jaafar al-Hamdani, had confirmed in his speech that this forum is a great opportunity for Iraqi companies to enter into agreements with their Iranian counterpart and to create conditions conducive to their advancement to be strategic partnerships, especially since the Iranian companies were able to accomplish many projects at the level of the Islamic Republic and regional states and internationally.
As the president of National Business Council of Iraq, Mr. Ibrahim Al-Baghdadi to establishing joint Iraqi – Iranian Council to take over the support and care of the private sector and investment in both countries, similar to the rest of the joint councils with friendly countries, emphasizing the desire of the Council, which includes a group of businessmen in Iraq, in cooperation with Iranian companies in different investment forms and in all economic sectors, whether on the basis of long-term cooperation or any other type of partnerships.
The first day and second of the Forum witnessed organizing workshops that represented (11) economic hubs which focused on important sectors of common interest between the two sides, these workshops were held with representatives from the private and public sectors in both countries for each sector.
The Forum was ended in the second day with announcing the final statement which confirmed that there are several memorandums of understanding had been agreed upon between the two sides and in different sectors and there will be a review and assessment of these notes and evaluation will be from the date of completion of this Forum in two phases after the first three months and the second end of the this year and so the two sides will evaluate the memorandums that shall be implemented and those are in progress or which have not been implemented to determine the reasons and obstacles that have prevented the implementation.
The statement added that it is hoped that an investment conference will be held in the capital Tehran, Islamic Republic of Iran during the month of April or May of next year, which will be complementary to the recommendations and accomplishments this current forum.