The National Investment Commission: Work in Bismayah Project is proceeding according to Schedule

The National Investment Commission: Work in Bismayah Project is proceeding according to Schedule 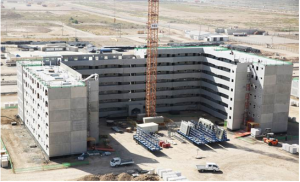 NIC confirmed that work in Bismayah city project is proceeding according to schedule agreed upon with the excuting company despite the exeptional conditions Iraq is going through, clarifying that the company had accoplished the infrastructure of the first housing compound in the project while it is comleting the construction of its housing units simultaneously with leveling the land and laying the pillers and the building bases in the neigbouring housing compounds.

Meanwhile, the finishing work in the housing units constructed is moving ahead according to the latest scientific technologies.

On the other hand, Hanawah Compan had submitted offers with complete designes to the conserned ministries regarding the services needed for the project represented by power grid, water networks, roads conecting the city to baghdad, kindergartens and schools, police and fire extinguishing stations, post offices, gas stations and others as NIC is negotiating with the company to sign a contract to implement the aforementioned works in the same time of completing the constructions and other utilities in the project site.