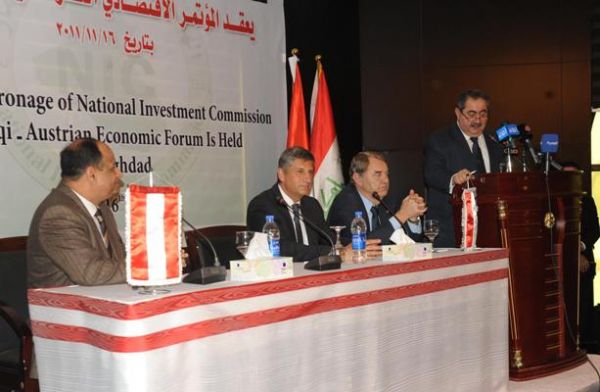 Under the Patronage of the National Investment Commission

The Iraqi – Austrian Economic Forum was held in Baghdad

Under the patronage of the National Investment Commission, the Iraqi- Austrian Economic Forum was held in Baghdad on Nov.16.2011 with the attendance of the Iraqi Minister of Foreign Affairs Mr. Hoshiar Zebari and the Deouty Prime Minister, Minister of Foreign Affairs of the Republic of Austria Mister Michael Spindelegger accompanied by a number of the representatives of the big Austrian companies

The Guest Minister expressed his country’s desire to enter the Iraqi market and to support the economic growth in Iraq through submitting Austrian expertise in the various economic fields assuring that this visit shall include a number of important meetings that aim at solidifying economic and commercial relations and mutual benefits.

Iraqi Minister of Foreign Affairs in his turn highly praised the NIC efforts in arranging the forum and hosting the Austrian delegation stressing the government ambitions to reinforce mutual visits for their importance in developing relations between the two countries considering this forum as an opportunity to exchange opinions and expertise for activating investment in the various economic fields like “Housing, Health, Industry, Agriculture, Education… etc”

The forum also included a speech for Mr. Richard Schenz – Vice president of the Austrian Federal Economic Chamber through which he assured that Iraq is the third best market for Austria in the region after the Kingdom of Saudi Arabia and the United Arab Emirates as the commercial exchange with Iraq had reached 450 Million $ during the first part of this year rising 170% because of the fast growth Iraq is witnessing.

Mr. Schenz assured that Iraq is of big importance for economists in Austria and that the first office for the Austrian economic chamber in the region was established in Iraq in1955 after Austria got Independence.

The NIC Economic Advisor, Mr. Abdullah Albander warmly welcomed the guest Minister and the accompanying delegation saying that this forum will have high impact on activating and developing the bilateral relations expressing his hope to come up with important economic partnerships between the Iraqi and Austrian private sectors the matter that will serve both sides economic benefits.

The Forum was attended by representatives of 16 Austrian companies like MOV which is specialized in Oil industries and the Austrian airlines Company with a number of banks while attendants from the Iraqi side were the representatives of several Ministries “Industry, Housing and Reconstruction, Trade, Baghdad Mayoralty, Iraqi National Business Council, Iraqi Businessmen Union and NGOs.