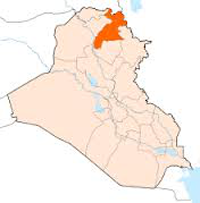 Arbeel or Irbil is the capital of Kurdistan of Iraq. It is the fourth city in Iraq regarding area after Baghdad, Basra, and Mosul. It is 360 km from Baghdad. Mosul city is westwards of Irbil, almost 80 km away from it. It is 112 km away from Sulaimaniyah.

The area of Irbil amounts to (13.165) sq km. The Governorate occurs within the steppe area which has transitional climate between that of the Mediterranean and the desert climate. It is characterized for its sever cold and drop of humidity average. Irbil is regarded as one of the historically important cities throughout ages and an important effective cultural and civilization center in Kurdistan of Iraq. Its naming refer back to the Assyrian age when it had been given the name of (Arba-Ilo), i. e. the four Gods. This is a metonymy of the important Assyrian temples at Irbil.

The number of the inhabitants of Irbil amounts to 1.540.131 person.

The governorate has more than 15 private hospitals cover all the specializations and a number of the State central hospitals, among which are (Irbil University hospital, Azadi hospital, Rezgari hospital, Central children hospital) and many medical centers all over the Governorate constituencies and Districts.

Irbil is the capital of Kurdistan Reign and a commercial center. It has a land strategic line which links it to Iran and the border center of Choman for commercial exchange. The Governorate has three around streets, street 60, street 90, and street 120. It has Irbil International Airport as well.

It is situated at the center of the city of Irbil at Kurdistan of Iraq. Its history dates back to the Assyrian age, approximately the first millennium B. C. It had been built primarily for defensive purposes, as it was regarded immune stronghold for the city of Irbil by then.

This waterfall occurs between the cities of Khalifan and Soran. Its length is 12 km. It is situated between the mountains of Korek and Nouatheen, 60 km from Shaqlawa summer resort. Gilli Ali Beg waterfall descends from a high point in a high speed. It is 130 km from the city of Irbil and it is one of the beautiful summer resorts in Irbil and in Iraq in general. It is 800 m. above sea level.

The city is famous for its waterfalls and mountainous nature as it is situated on the mountain Sifeen.